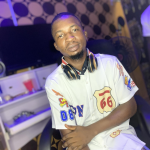 Folarin Usman Babatunde, professionally known as King Soundboi (born May 27th). He is an Indigenous Nigerian Rapper and music producer (formerly a Dj). He hails from Ibadan. He has a good sound, updated sound, and lyrics, which is making him gaining more fans these days.
The name “King Soundboi” came from an unknown man which he also loves so much and made his stage name.

His music career started professionally in the year 2014/2015 with his first track “Gbesunmomi” He’s a big fan of entertainment which made him choose music to fulfil his dream and passion. Olamide, Seriki, and Reminisce have been his source of inspiration and making him believe he can do it perfectly. He’s also a big fan of Naira Marley, who he would like to collaborate with because they have the same styles and sound in common.
He has performed in so many places, however, he likes to perform in the midst of students. His music genre can be categorized as Afro Dance Hall. He’s also a Graphics Designer (https://www.instagram.com/csb_page/)

He has participated in so many music competitions and has won many. AWARDS like;

One thought on “King Soundboi Biography”